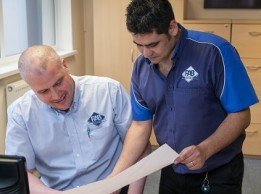 innovation award which will see the company heading to Parliament later this month.

The awards aim to recognise examples of innovation excellence among the projects funded by Innovate UK. The awards celebrate projects and companies that demonstrate the impact of innovation on business growth and driving the economy, and can inspire others.

Mark Brazier, CEO of PAB Coventry comments “2016 is our 30 year anniversary and to be nominated for this award is an honour and testament to the hard work and dedication of everyone working for PAB. We have ambitious plans for growth and development and our innovative approach to new technologies plays a big part in our success. We are looking forward to attending the Innovate UK at the awards ceremony in Parliament later this month”

Innovate UK Chief Executive Ruth McKernan said: “Our small business awards showcase the stories behind some of the excellent new innovations that Innovate UK helps to get closer to market every year. They also help Parliamentarians see how vital business-led innovation is to growing the economy and any industrial strategy.  I want to congratulate PAB on being shortlisted for an award and I’m looking forward to meeting them in Parliament and hopefully sending them back with an award.”

The awards will be presented by Universities and Science minister Jo Johnson MP, and Chief Executive of Innovate UK, Dr Ruth McKernan on 25 October in the House of Commons.

Since 2007 Innovate UK has invested around £1.8 billion in innovation, which has been more than matched by the private sector – returning up to £13.1 billion to the economy. Innovate UK has supported innovation in 7,600 organisations, creating around 55,000 new jobs – more than 7 for each company we have worked with.

To find out more about PAB Coventry and how we can with you on your R & D project, please get in touch.

PAB Coventry has worked on a number of prestigious R& D projects for manufacturers across the UK.

We use cookies on our website to give you the most relevant experience by remembering your preferences and repeat visits. By clicking “Accept All”, you consent to the use of ALL the cookies. However, you may visit "Cookie Settings" to provide a controlled consent.
Cookie SettingsAccept All
Manage consent

This website uses cookies to improve your experience while you navigate through the website. Out of these, the cookies that are categorized as necessary are stored on your browser as they are essential for the working of basic functionalities of the website. We also use third-party cookies that help us analyze and understand how you use this website. These cookies will be stored in your browser only with your consent. You also have the option to opt-out of these cookies. But opting out of some of these cookies may affect your browsing experience.
Necessary Always Enabled
Necessary cookies are absolutely essential for the website to function properly. This category only includes cookies that ensures basic functionalities and security features of the website. These cookies do not store any personal information.
Non-necessary
Any cookies that may not be particularly necessary for the website to function and is used specifically to collect user personal data via analytics, ads, other embedded contents are termed as non-necessary cookies. It is mandatory to procure user consent prior to running these cookies on your website.
SAVE & ACCEPT
Scroll To Top